when the camera position changed the performance changed from decent (distance at 40) to horrible (distance at 0).

First step to find a problem is to reproduce it. So I copied the example code, fixed small compiler issues, and created shaders which were referenced but missing in the question example code. They are simple so I guess the author used similar shaders.

Fragment shader for both drawing methods:

The vertex shader for instanced drawing:

With those changes I was able to confirm the questions claim. The performance of the indexed drawing was fine. The performance of the instanced drawing method was horrible. It not only rendered extremely slowly it also stalled the whole computer. The cpu load was nearly at 0%. Since the program stalled the whole computer the bottleneck must have been either some kind of a system wide lock (software or hardware lock) or a resource limitation.

Next step was to create a system event trace file. This would not only tell me what the analysed program is doing but also how it interacts with the system. Windows 7 onwards has a very powerful event tracing system. The tools to create and analyse event traces are wprUI (Windows Performance Recorder) and wpaUI (Windows Performance Analyser). Both are part of the Windows 8.1 SDK. Here is a very nice blog if one wants to get down to details of performance analysing:

I enabled “GPU activity” and “Video glitches” profiles in wpr, recorded a session of the slow running program and opened it with GPUView (also part of the Windows 8.1 SDK). The GPUView project site of Matt Fisher describes nicely how to read GPUView output. Here is a screen shot from GPUView’s output generated from the recorded event trace: 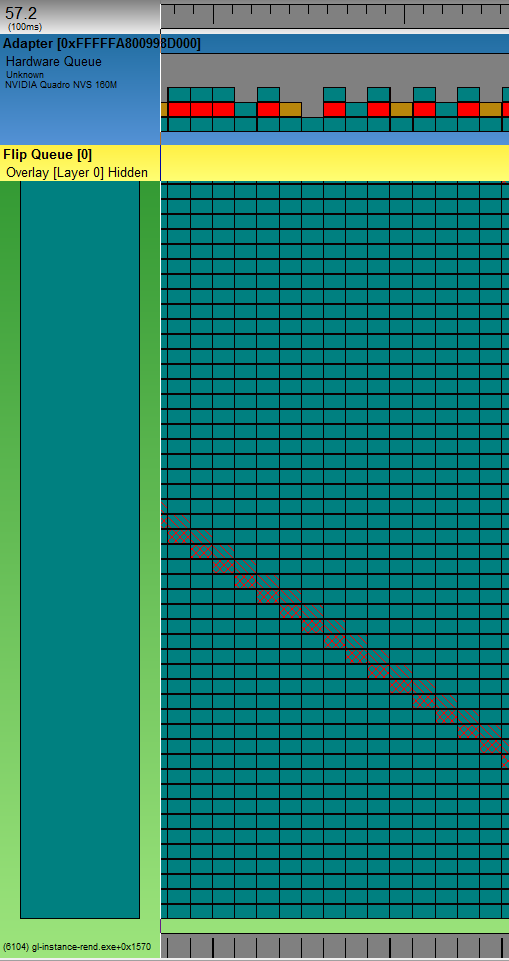 The light green lane is the test process having enormous rendering problems. The darker green parts are GPU command packets queued up in the process. The gray strip at the bottom is the CPU time consumed by the process. Since you see only thin black lines means the process is hardly consuming CPU time. But it heavily uses GPU. At the top you see a ruler. One tick of the ruler is about 100ms. The top blue lane is the graphics card and the hardware queue of command packets. The dark green packets are packets from the test process which are moved from software to hardware when there is room in the hardware queue. So it takes the GPU around 100ms to process one dark green packet! The red packets are from the idle process and the brown from the dwm.exe process. Don’t get confused by the size of the red and the brown packets. One needs to get used to the presentation type of GPUView. The packet in the pottom row of the hardware queue is the packet being processed. This packet determines the width of the whole (!) column. When it’s the turn of the red and the brown packet to be processed, they are so fast, that you never see them in the bottom row. Here’s a screen shot zoomed in onto one of those red packets:

The ruler ticks are now one ms. Once it’s turn for the red packet to be processed, it finishes in less than 1ms.

So we found out that the GPU is the bottleneck. The application hardly uses CPU but it creates heaps of GPU command packets and each packet takes ages (in terms of GPU time) to be processed. The question is: why?

The next step in finding the problem is ninja debugging. Cut away anything which does not relate to the failure. Reduce the complexity of the test. Reduce it as far as possible. Sometimes it’s easier to restart from scratch and add complexity until the problem occurs. This is what I did. I recreated the program step by step. First it drew small numbers of cubes with indexed drawing and instanced drawing. Then I added more and more cubes. GPUView confirmed that the number of command packets increased along with cube count. This was expected. But the execution time for each packet was around 0.8-3ms depending on the camera position (how many cubes were visible) but independent of the drawing style! Indexed drawing and instanced drawing were equally fast. 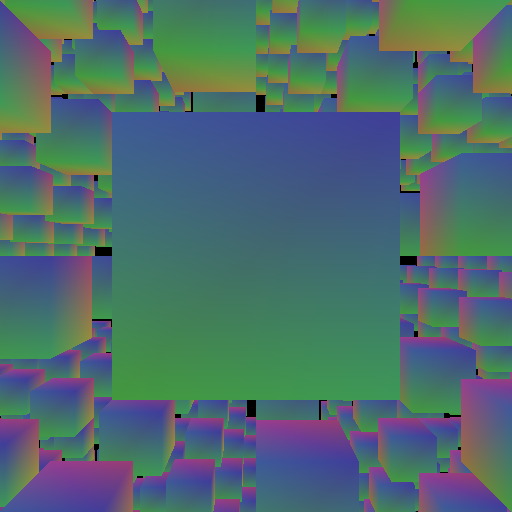 But in my rewrite I placed the camera between the rows and colums: 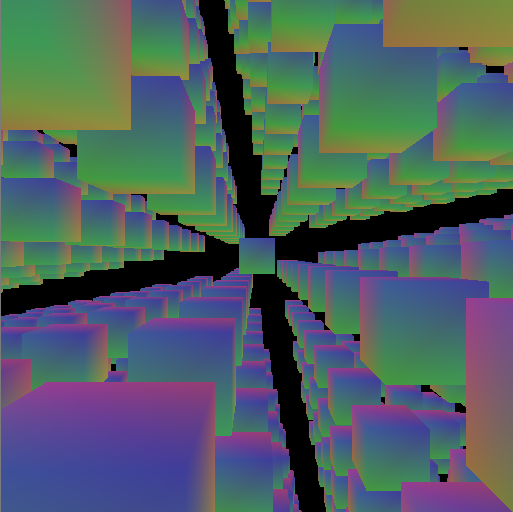 The strange cube was there in both versions. But in my rewrite it got visible. The performance dropped when the camera moved towards this cube.

I continued replacing parts of the program until the problem disappeared. And also the cube disappeared! I reverted my last change and realized that it was a bug in the code triggering the problem, not some strange OpenGL behaviour. This is the buggy line drawing the cubes:

glDrawElementsInstanced expects the count of instances (cubes) to draw not the count of array elements. So instead of drawing 8000 cubes — as it was meant to — it drew 24000 cubes. But that’s not the whole story. ;)

Let’s remember the vertex shader. For each instance it reads three float values from the latticePoints array and stores them in the vec3 translation variable. Since OpenGL tried to draw far more instances than the latticePoints array was able to supply (latticePoints contained 24000 float elements, but OpenGL tried to access 24000*3=72000 elements). So this out of bounds situation would usually create a illegal memory access. Luckily there are facilities which prevent a shader from crashing. So instead of a crash the shader just received zero values. translation was set to (0,0,0). No translation at all. This is the explanation for the mysterious cube in the center. Or more exactly: the 16000 mysterious cubes in the center.

But why did it only perform so horribly when the camera moved towards the center cube? The vertices of the 16000 additional cubes did not make it so worse. I did some testing to come up with the solution for this. The program hits the graphic card memory speed limit. How’s this? Here is what happens: Each fragment (pixel) painted by OpenGL has to be written to the graphic card memory. OpenGL prevents the most paints by not painting invisible parts at all. This is called “depth buffer” or “z-buffer”. The depth buffer is very good at this task. But how about identical objects on exactly the same position? Is the front face of cube 8001 concealed by the front face of cube 8002 which is on the same position? It looks like OpengGL assumes it is not. So it paints all front faces of all 16000 cubes in the center. When the cube is far away this are not many pixels. But as the camera moves towards the center the front face of the cube covers more and more pixels. When the calculation time for one frame drops to 500ms the cube is roughly 250 x 250 pixels big. Let’s do some math:

So the NVS160M is able to move 5,6GBytes per second (I’m ignoring the memory type here for simplicity). According to the calculation above the program moves about 6GBytes per second. Don’t nail me down to the numbers! Everything is approximately! But this little calculation points out that the memory speed is clearly on it’s limit. I did other tests to verify this. I moved the 16,000 cubes a little bit on the z axis so the fist one would conceal the others. The frame processing time dropped drastically (16ms per frame)! Then I disabled the depth buffer which kept OpenGL from drawing unnecessary pixels. There it was againu, the horrible performance. Then I created another small program which would just paint two triangles to form a square and let OpenGL paint it thousand times. It surely took long. For a full screen windows of a size of 800 x 600 the GPU required 400ms per frame. Nearly no geometry. Only 6,000 vertices!

So here’s the culprit: graphic card memory speed. Or: the bug. Depends on the perspective. ;)

For the vigilant reader of the original stackoverflow.com question: the enabled multisampling surely took it’s toll as well.

You May Also Enjoy

I stumbled across a blog post series and a repository implementing the Raft consensus algorithm in Go. Eli, the author, did a great job there, but in my opin...

In Better Commits - Part 1 - Code Format I introduced a script which commits the code format changes separately from the logic changes. Consequently committi...

In our team we’re doing code reviews. But they tend to render the commit history messy.

In the first part Better Commits - Part 1 - Code Format I presented a way how you can make your code history easier to read by committing format changes sepa...