Actually this blog post is not about Google. And it is even not about copying code. But it is indeed about code which I did not write.

Since a couple days we use SonarQube to check our code for coding style or conventions violations. Well this is not that new. We used to use Checkstyle, PMD, Findbugs already for a couple of years. But the switch to Sonar brought the heap of violations in our code up my mind again. Sonar says we have around 3000-5000 violations in our projects. Probably the most of them are eligible. But some of them are not: 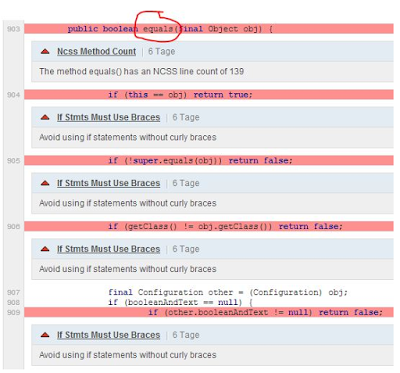 I thought about how to tell Sonar to ignore this code. One could use the //NOSONAR comment to make Sonar ignore lines. But you’d have to place it on every line. Or you could use

but this would suppress all warnings, not only Sonar violations (reference).

Then I stumbled upon @Generated annotation which is part of Java since 1.6. Using this annotation, code generators could automatically mark generated code, making life easier for code analyzers and developers. So in a perfect world my Eclipse code generator would generate this method:

and all code analyzers would magically ignore this method.

This idea was already picked up by the sonar team. But sadly it’s not yet implemented.

You May Also Enjoy

I stumbled across a blog post series and a repository implementing the Raft consensus algorithm in Go. Eli, the author, did a great job there, but in my opin...

In Better Commits - Part 1 - Code Format I introduced a script which commits the code format changes separately from the logic changes. Consequently committi...

In our team we’re doing code reviews. But they tend to render the commit history messy.

In the first part Better Commits - Part 1 - Code Format I presented a way how you can make your code history easier to read by committing format changes sepa...